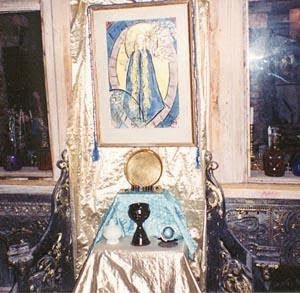 Many thanks to all who worked so hard to contribute to this delightful Festival which we celebrated together as ever with so much enjoyment.  Particular thanks to Maire Doyle who has recently joined us in the Circle of Brigid for coordinating everything on this occasion.

Presented by Members of the Priesthood & the Circle of Brigid
The Star of the Day at Clonegal was undoubtedly Nature Herself, bursting forth in absolutely glory and astonishing growth since our last gathering for the Vernal Equinox this year, and it was impossible not to experience the raising of our spirits at this wonderful time of year.   After meeting and greeting in the Castle Tea Rooms we gathered in the Theatre which adjoins them.  This has been freshly decorated and provides a wonderful and unusual venue for year-round events at the Castle, which we very much appreciate being able to use for Festivals.

Marian then commenced proceedings with a beautiful energy raising exercise based on Ra and His connection to the Land, so that we might go forth in Procession chanting and remembering the Egyptian Traditional understanding that all of Nature, together with all Beings expresses the innate presence of both God and Goddess within All its manifestations.  This provided a lovely introduction to our Procession to the Grove of the Druid Clan of Dana, led by Eimear and David down through the Orchard and on to the Yew Walk and paths through the Wilderness where on every side tall fresh green growth and flowers crowded alongside us as we walked!

David opened the Portal to the Grove between two of the great Redwoods which form the magnificent Grove of these incredibly tall trees, which were planted only in the early 1900’s, but create a cathedral-like energy within which to invoke the Goddess Dana. We are blessed to have access to it.  We then made our way onwards for Invocations first at the Abbey, home of the Noble Order of Tara, and then at Persephone’s Gateway to the Temple of Isis, and then beside Brigid’s Well of Truth followed by individual Blessings to all given by the Priesthood.  Maìre presided over the Ceremonies at the High Altar and, we had a wise and deep Oracle from the Goddess Danu through her Priestess, Eimear.

Luke took us on a Journey through the Land & the Sacred Fires traditional at this time, and we heard a fine Beltaine poem created by Sarah.  Then came one of our popular Mystery Plays!  This time it celebrated the Festival of the Sacred Marriage, the mystery of the fertile land being brought to life again by the return of the potency of the Sun.  The fiery interchange between the God & Goddess was ably represented by Deirdre and David and sparks flew as it became clear that not only was there was much wisdom in what they both had to say, but no quarter was given on the important matter of equality and respect, to be both given and received!  All this was received with great delight as ever in the Temple where Olivia always made us laugh!

After thanks were given to Deity for their undoubted presence throughout, short healings were given to those who requested them, and everyone repaired to Osborne’s in the Village for a well deserved home-made tea, and plenty of enjoyable conversation with new and old friends.  I will conclude with a short poem of my own which I also gave at the end of the ceremony in honour of the incredible abundance of so many spring flowers this year after the terrible earlier rains and floods.

Daffodils
“Daffodils, their crumpled petticoats though faded
Still suffuse my senses with their silken perfume.
Those fragrant edges of the stems
Evoke an ancient friendship
Firm and upright, loyal, true,
A knowing that has been for ever Spring!”

Posted by Fellowship of Isis Central at 6:37 AM