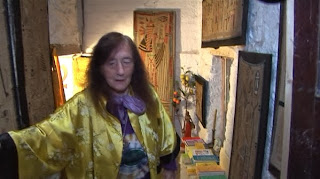 A video clip created to honor the memory of FOI co-founder Olivia Robertson has been shared with Fellowship of Isis Central. It was compiled by FOI priestess Carrie Kirkpatrick.

Fellowship of Isis Central extends sincere thanks to Carrie Kirkpatrick and to Caroline Wise.

In Memory of Olivia 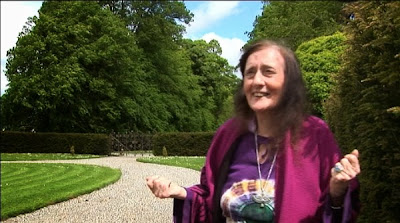 Many, many thanks to all of you who tuned in from afar and supported everyone present with their love at this sad time. There was never going to be room in the Temple for everyone who would have liked to have been with us for Olivia’s Dulce Domum. Cressida crafted and led this most beautiful and moving private ceremony truly exquisitely, in the presence of her family, their guests and those of the Fellowship whom she had personally invited.

To go back a little, the days following Olivia’s passing, which her great nephew Alexander very kindly informed me of shortly afterwards, were marked by a great peace and the weather which had been wild, wet and windy became calm, dry and bright, and much warmer for a couple of days at least. It was as if Nature was marking and welcoming her passage into spirit. I walked my dogs and drank it all in and reflected upon the personal relationship which I had with her over the past number of years, as she strove to provide the Fellowship with everything which she could to enable it to thrive and grow in grace in the future.

I found myself reminded time and again of something she said to one of our members shortly after she had fractured her ankle and was in hospital in early June. She was puzzled as to “why” this had happened to her. Eventually, after a customary consultation with her guidance on the matter, she reported that she had finally realised “that it had never occurred to her to step down” - at 96! And many members had become used to receiving personal answers to the huge pile of letters which arrived in the post for her every day. In addition, she worked with me on general matters and keeping up to date on writing articles for Isian News; sending emails out to the sites and individuals; and virtually single-handedly planning and running the 8 Festivals with the assistance of the priesthood mainly on the day.

It was a quite astonishing workload for a lady of her age even if, as we all know, she had been “decentralizing” for many years. But so great was her devotion to the wellbeing of the Fellowship that she continued to focus on it right up until very shortly before she finally passed on. Mercifully she had been in good general health and in full possession of her faculties throughout her time in hospital until then. Fortunately she had asked the Circle of Brigid to host Festivals at Foundation Centre in her absence and this has been done since the Summer Solstice. You will be delighted to hear that at the warm invitation of Alexander supported by Olivia’s extended family, and in particular, Olivia’s niece, Cressida Pryor, her appointed successor, we will continue to hold the 8 Annual Festivals at Foundation Centre at Clonegal into the future.

The day before the Funeral, the family graciously extended the customary invitation in Ireland to those who knew her locally to come to her “Lying In” within the Castle and a number of our members were honoured to be included. The weather was mild and the atmosphere full of light as we entered the Yard from the far end. We were assured by some of our members coming out that we could go down into the Temple if we wished and then on upstairs to the dining-room and to Olivia’s drawing-room which adjoins it to pay our last respects.

In going down to the Temple first, we were greeted by a most beautiful atmosphere. Everything shone and gleamed with the loving preparations which had obviously been made by so many family members for the Dulce Domum next day.
Standing for a moment between the pillars facing the High Altar I was transported upwards by the powerful energy of the Goddess and the words of the rite floated into mind – “Rejoice. Olivia is Isis Risen” and I was reminded that immediately above was the true “Holy of Holies” - the place in her private drawing-room, where she had communed with the Goddess, meditated daily, received inspiration and written the Liturgy. This was the very place where Olivia’s body now lay in waiting for her last earthly journey home. Leaving the Temple and going up to the Castle dining-room, everything was beautifully prepared to welcome each guest as they arrived. Members of the family served tea so that they might feel at ease, and share a few words and memories of Olivia before going in to see her one last time.

It was an exquisite experience - she lay at rest, cradled in a beautiful light wicker casket draped at the foot with one of her familiar velvet hooded cloaks in a soft violet, with a small posy of the last of the summer roses from the garden resting on it. She looked totally dignified, as she would have liked, surrounded by her most treasured belongings. She was not there but it didn’t matter for she was everywhere else - in the Temple - in her kitchen where we had spent so many hours together -  and above all, as many of us agreed, outside in the Grounds, where she had walked every day since childhood. Nature again conspired to honour her, reflecting the many moods of this whole period of mourning but also rejoicing in her wonderful long life.

I will leave the detailed description of the day of the Funeral to others in the main. It was bitterly cold but dry and clear, though it had rained hard during the night. Suffice it to say, the magnificently coloured leaves were coming down and sun lit up the distant hills as I came into the Yard. The tall great lime trees at the head of the Avenue waved their branches and bowed in the breeze as the sun came out from behind the clouds in a burst of warmth, just as Olivia’s casket was carried out through the front door of the Castle, and down the steps, on the strong young shoulders of her great nieces, something which Olivia would have absolutely loved, to be placed reverently into the Hearse, to be led by a Lone Piper followed by the family, friends and Fellowship members down the Avenue to St. Fiaac’s Church of Ireland Church for the service and burial there with her beloved family members in this lovely ancient cemetery, overlooking the Valley of the River Slaney which flows through Clonegal and on to the sacred coming together of the two rivers which she spoke of so many times.

May her memory be blessed.

Much love to you all,
Minette

Say My Name That I May Live Ritual 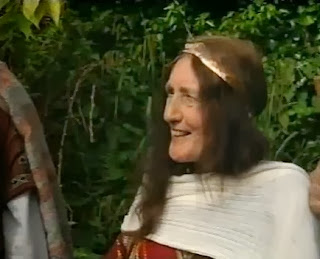 Say My Name That I May Live – for Olivia Robertson


For Those Who May Wish to Participate


After consulting with members of Temple of Isis/Los Angeles, we wish to invite FOI members who wish to participate in the “Say My Name That I May Live” rite for Olivia Robertson. This ritual was conceived by the late Laura Janesdaughter.


This is a very simple ceremony that can easily be added to your regular daily devotions. Light a candle on your altar and then sound a bell one ring. (You can sound a sistrum, singing bowl or gong if you don’t have a bell) accompanied by “I say your name that you may live, Olivia Robertson.”  This ritual should be carried out for 70 days in accordance with ancient Egyptian tradition.

Official announcement on behalf of the Fellowship of Isis from Cressida Pryor, Olivia's niece, Caroline Wise and Linda Iles of FOI Central website. Sad news for the Fellowship and the wider Goddess community in the world, Olivia died last night. It was peaceful and she had her family with her. Her family ask that their privacy is respected at this time. A really great and original figure has left us, Many blessings.

Posted by Fellowship of Isis Central at 7:06 AM