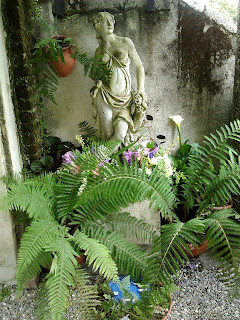 Just over two weeks ago Lady Olivia fell in the grounds of the Castle and unfortunately suffered a fracture to one of her ankles.  She has been in hospital since, however, she is making an excellent recovery and is in good spirits and general health.  All she needs is time to recuperate fully and as our Summer Solstice Festival was coming up very shortly, she sensibly decided to invite the Circle of Brigid, together with the Druid Clan of Dana and Noble Order of Tara to facilitate the Ceremonies with her full support in spirit but not in person for the very first time for us.

Many members of our priesthood have been visiting her over her period in hospital and you will no doubt be aware that she has sent out a number of important messages to the Fellowship, very much facilitated by Marian Smiles who lives in Waterford and has been with her practically every day.  She has our great thanks and appreciation.

We had a lovely day for the Festival, and after gathering briefly at the start in the Theatre we processed, drumming and singing, (many thanks to Eimear & Sara Nolan) down to the magnificent grove of Californian Redwoods which now tower high overhead, but which Olivia remembers her father planting when she was a small girl!  Invocations were given by David de Roeck and Eimear Burke and other members of DCD.  This Druid Grove is the original spiritual home of the Druid Clan of Dana worldwide.

Following this we processed back up towards the Castle past the ancient yew walk, up over the well manicured lawns and lovely fountain, up the steep steps to the ruined remains of the Abbey which is at right-angles to the front of the Castle and is beautifully secluded with greenery and flowers clambering over and round the remaining walls. The original altar stands before a high pointed window, long open to the skies and a perfect place to honour the Goddess Tara, the spiritual home of the Fellowship's Noble Order of Tara. Here David de Roeck, Sean McCabe and members of the Noble Order invoked Deity.

We then proceeded to the beautiful, newly created Garden Shrine of Persephone beside the Garden Entrance to the Temple.  Here Maureen Sullivan invoked Persephone, Queen of Hades, Poet of Elysium, Goddess of Olympus with the apples, and thanks was given to Pamela Currey, Lady Olivia's Great Niece, for her work in creating this delightful Shrine.

In the Temple it is traditional to gather at Brigid's Well, the Well of Truth, and it was Lady Olivia's wish that I, Minette, should represent her at the Well where I felt inspired to read out her recent Message which appeared on all global sites speaking of the Sacred Places at Foundation Centre and her Vision in 1945 that it was to be a Centre of Light for Ireland and the World through the Fellowship of Isis.  Invocations were made by the Priesthood and Blessings of the Goddess given to everyone attending with water drawn from The Well of Truth, The Holy Grail.  These Blessings have always traditionally be given by priestesses.

At the High Altar of Isis a Priestess in trance awaited, and after everyone had quietly assembled we received a powerful Oracle from Isis from Maureen Sullivan.  Marian Smiles & David de Roeck presided over the following ceremonies which included the traditional Midsummer Marriage ritual and Ordination of a new Priestess, Angela Lordan whom we all welcome to our company.

The ceremonies ended with the usual notices and regular members, were asked to let the Hon.Sec.Circle of Brigid know by email, text or phone, that they intend to attend our next Festival (date announced at the meeting) so that catering numbers can be known more accurately in future for our popular teas in the Village after ceremonies.  It was suggested that they look up the email address under FAQ's for visits and invitations to Festivals at the Castle on the global sites.

We concluded with various members of the priesthood offering short healings and consultations afterwards in the Temple.  We then repaired for tea to the Village and enjoyed sharing artwork brought this time by Pamela Currey and Minette Quick.  Members are invited to bring along anything they would like to share in future, poetry, artwork and so on.  Minette had already read out the poem given her by the Fairies of the Shining Web of the Fairy Tree Grove near her home, 'Come with me to the Enchanted Land'. 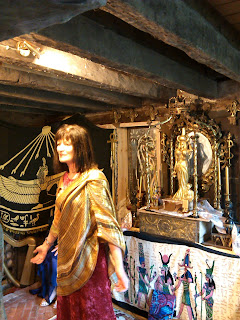 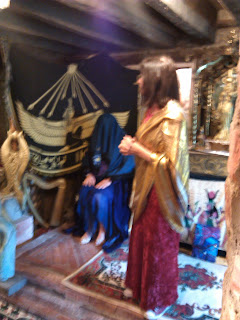 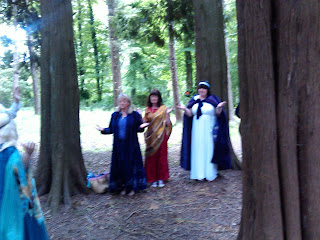 Photos courtesy of Marian Smiles, taken by Sean McCabe. Account of festival courtesy of Minette Quick.
Posted by Fellowship of Isis Central at 6:45 AM 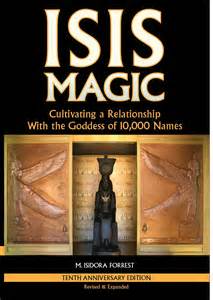 PORTLAND, OREGON—After being out of print for more than six years and with prices for that out-of-print first edition rising to $400 or more, Isis Magic is back in a revised and expanded 10th anniversary edition.

Writer Normandi Elliis, author of Awakening Osiris and Dreams of Isis, says of this new edition, “I am thrilled that this pivotal book is being reissued. Whether you know Her well, or whether She has called you to know her more intimately, this book will bring you closer to Isis as an embodiment of the eternal presence of mystery, healing and love. This book is indeed Isis Magic at its best.”  (To see more reviews of Isis Magic, please visit www.abiegnushouse.com/reviews)

Isis Magic has served as a resource and inspiration for a wide range of people. Historical novelist Stephanie Dray used it to research the religion of Isis for her three-novel series on the life of Cleopatra’s daughter, Cleopatra Selene. Importantly, it has been a valuable guide for the thousands of women and men who have used it to create or deepen their personal relationship with one of the most well-known and well-loved Goddesses of all time, the Egyptian Goddess Isis.

Isis Magic begins with a well-researched and in-depth history of the nature and worship of Isis from Her ancient Egyptian origins to the modern day. In this first part of the book, readers discover the many faces of Isis, from Ancient Bird of Prey Goddess and Lady of Magic to Queen of the Mysteries, Savior, and Mistress of Hermetic Wisdom. Readers will learn how Isis later became disguised as a Black Madonna, a historical Queen of Egypt, and even as an Alchemical Principle—as well as how Her true identity as a Goddess was retained in the inner teachings of some secret societies. Finally, readers follow Isis into the 20th and 21st centuries as Her undisguised worship is revived, first by colorful personalities like Dion Fortune and influential groups such as the Hermetic Order of the Golden Dawn, and today by worldwide associations like the Fellowship of Isis.

The book’s second half applies this knowledge to a four-part spiritual journey to the heart of the Goddess. With each step, the reader enters a successively deeper stage of relationship with Isis. By participating in exercises, meditations, and powerful, beautifully written rituals, readers can initiate themselves into the magical religion of Isis and become, if they so desire, Her dedicated priestess or priest.

Written by M. Isidora Forrest, an ordained Priestess of Isis and Hermetic Adept, Isis Magic brings the worship of Isis to life. It is the perfect resource to aid the individual seeker, to inspire a circle, coven, or Iseum, or to serve as a program of spiritual growth and personal development for those called by Isis to be Her priestesses and priests.

Isis Magic is available via the publisher’s website, www.abiegnushouse.com for $29.95 (the same price as the original edition of more than 10 years ago). Other retail outlets are also being investigated.

Posted by Fellowship of Isis Central at 11:44 AM


All Ancient Faiths had deep roots in some earthly home, which meant the mother to them. We think of Jerusalem, Mecca, Glastonbury, The Great Pyramid, and above all the Sphinx.


I, Olivia, was told from Spirit, in 1948, that my brother and I were to work for a Centre of Light at Clonegal.  Clonegal is a mile from the meeting of the waters, where the castle is built, and where the river of healing, the Slaney, is joined by the river of the Oak, the River Derry. Where they join, there is an island of swans.


In a vision, I was shown by angelic beings, a view of the castle from the sky.  Light poured from the castle, and I gathered the source of the light was from the well of Truth, St. Brigid’s Holy Well.


For some years, my brother worked on energy coming from the granite from which the castle is built - some underground source of psychic power, and also the white and silver power, like water, descending from the sky into the well.  My brother was told from Spirit, that the well was for the healing of Ireland, and that the rainbow colours emanating from the dark, black earth energy from underneath the dungeon, was for the world. We were told to welcome people from all over the world, for healing, blessing, and psychic vision.


At this time of the new aeon, 2013, I feel we are to activate this sacred place of Dana, Tara, and Brigid, Danann goddesses of Ireland.


On the grounds, at an angle to the Castle, is the old abbey ruin, with a magnificent stone altar. These act as priory of the noble order of Tara. We have performed ceremonies there regularly, at the grove of trees in the wilderness near the lake and the island which is the cauldron of the god Dagda, and river Derry of the goddess Morrigan. This is the grove of the Druid Clan of Dana, where ceremonies have been held for many years.


The Rainbow Circle of Brigid has the honour of giving forth the well water to those in need. Each cup represents the holy grail of the new aeon.  All members spread Brigid’s rainbow rays throughout the world for healing, sent forth with wisdom and love.  Any solitary member can enjoy the healing and vision from the well and from the rainbow rays of Brigid, Love, Beauty and Truth


Olivia, assisted by Marian Smiles and Minette Quick, of the Rainbow Circle of Brigid.

Posted by Fellowship of Isis Central at 9:08 AM

Olivia Durdin Robertson has arranged for all ceremonies at Clonegal Castle to be facilitated by the Circle of Brigid, the Druid Clan of Dana, and the Noble Order of Tara. A general plan has been approved, including her family. This is part of a general plan to protect the future Fellowship of Isis from inappropriate use.
Posted by Fellowship of Isis Central at 6:40 AM