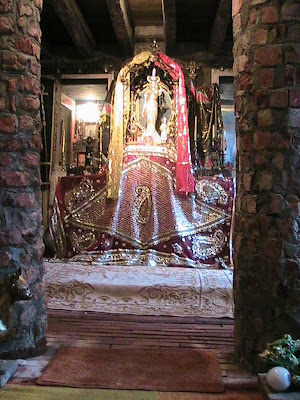 The Festival was, as Olivia would say, a great success!  Sadly, once again she was not able to be with us, but she sent her blessings and was delighted to hear that it went so well.  Still patiently waiting to be fully rehabilitated and back on full form at the Castle, her spirits and general health is excellent and everyone who visits remarks that she is really looking very well and rested.

Having gathered in the Theatre for a short introduction, the Procession set off singing, through the orchard and down to the spiritual home of the Druid Clan of Dana in the Wilderness, the Druid Grove of giant redwoods.  Here David de Roeck of the Ascension of Isis group, opened the portal between the trunks of two of the great trees before the company entered, and Eimear Burke of DCD led the invocations.

Unfortunately rain began to fall as they proceeded onwards to the Abbey, spiritual home of the Noble Order of Tara. After the traditional portal was opened invocations were led by Cait Branigan.  Because of the rain these were necessarily quite brief and the procession moved on down the steps to the Garden Gate to the Temple, where Maureen Sullivan invoked Persephone in her beautiful garden shrine under the sheltering cover of the steps to the balcony above.

The portal to the Temple once opened the company moved to the Gate into the Shrine of Brigid na Mara. The bell was rung and Priest and Priestess questioned and answered and admittance was gained.  At the Well, Lady Olivia’s recent ‘Rejoice’ message to the Fellowship was read, as an invitation to all to approach the Well of Truth in happy communion and equality of spirit with those who represent Deity and love and guide all who seek their aid. The priesthood invoked many Deities in both Irish and English and as it was Ra’s Birthday, it being not only Lughnasad but also near to Opet, his presence was specially invoked by his priest.

The Holy Grail filled with water from the Well of Truth was lifted as Brigid’s presence for healing was invoked and individual Blessings from the Goddess were given to each one attending. At the High Altar a priestess in trance awaited, and we were given a most beautiful, calm and clear Oracle  by Mairé Doyle, which spoke of the message of balance, needed so much at this time, not least between the masculine and feminine energies emphasised by the time of Opet.

Presiding at the Altar, Cait called upon Deirdre Wadding to unfold for us the drama of Lughnasad. The story of Lugh – the Sun God’s miraculous birth, his divine gifts, and magically foretold battles with his evil father, was played out with the eager participation of both primed and unprimed members of the audience who stepped forward to take part.  It was all great fun! We were reminded of the remarkable parallels in the stories of so many of the great messengers of truth over the ages. Cait then took us on an evocative mystical Journey up the Nile to partake in an ancient Egyptian Ceremony which everyone enjoyed very much.  Then it was time for notices, giving thanks and opportunities to receive healings and counselling. Maureen & Eimear presented Marian with a beautiful bouquet of white lilies as a mark of our appreciation of her devotion and care of Olivia during her long stay in Waterford, during which time she was able to send out so many encouraging and excellent messages to us all with Marian's aid.


Text and photo © Fellowship of Isis Central Website. Please do not reproduce.


Posted by Fellowship of Isis Central at 7:40 AM